THE CENTER OF THE WORLD 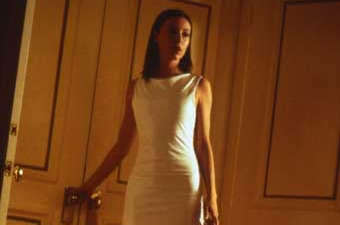 Richard, a dot-com entrepreneur in his late twenties, is a new e-millionaire in Los Angeles who in the last couple of years hasn’t spent much time away from his computer – which he calls “the center of the world,” doesn’t seem to have any friends beside his financial advisor, and feels a stranger in the world outside his office.

Then he meets Florence, a drummer who pays the bills by stripping and who regards her vagina as “the center of the world.” Wanting a bit of thrill in life, he offers her $10,000 dollars to accompany him to Las Vegas for three days – not necessarily just for “round-the-clock sex,” but also “to get to know her better.” Incredulous and reluctant, Florence sets a number of rules and conditions for the encounter, including no penetration, no kissing on the mouth, no feelings, and each will stay in separate bedrooms and only convene during the hours of 10 p.m. and 2 a.m.

Initially, they stick to the plan as laid out until they develop a fondness for each other. Still Florence tries to maintain the order of their agreement, even when Richard declares that he is in love with her and their sexual relationship begins to increase …