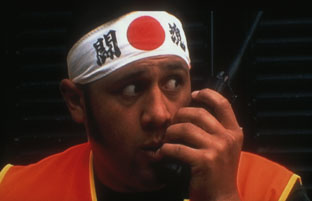 He comes from the mighty Kingdom of Tonga (pop: 105,600, principal export: baby squash). He is trained in the ancient art of ninjitsu. He is Tongan Ninja. Ever since his father was eaten by a fish, Sione was brought up to follow the way of the ninja. Now he must journey toward his greatest challenge and defend the beautiful Miss Lee and her restaurant from Mr. Big and the so-called Syndicate. These men will stop at nothing to get their hands on an ethnic hospitality establishment servicing the central business district.

Only his fists and his long years of training in Tonga will help him face Gun Man, Knife Man, Henchman, Chef Guy and Asian Sidekick. Finally, he must confront his ultimate nemesis – Action Fighter. Will love, and a great deal of violence, triumph in the end?