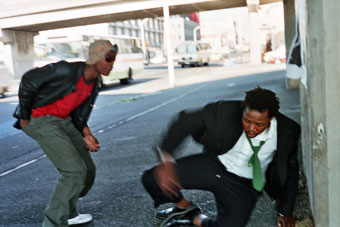 Tshepo, an unemployed youth, has to travel from Nyanga, a township on the outskirts of the city, to Cape Town for a job interview. Tshepo wants to become financially independent and respected in society. Statistically, being young and black, he should be the one who is empowered, but reality doesn’t leave him a lot of choices. Either work hard with probably little financial reward or become a tostsi (gangster), take what you want and go against social norms and ethics. The story is set between the moment he leaves his house and the moment he arrives at the office.