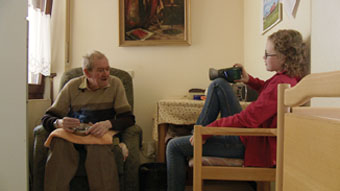 Three children from Frankfurt want to become documentary filmmakers. With an idea in mind and a camera in hand, each of them starts working, to shoot a real film! They are accompanied by a film team that helps them and, at the same time, documents the whole process.

Byron is 9, has a pretty high IQ and wants to make a film about highly gifted children. The film is supposed to be about their special abilities, but also about their problems. The more intensively Byron deals with “being highly gifted”, the more the film becomes one about himself.

Samuel is 12 and wants to make a documentary about his mother. She is an immigrant from Ghana, works as a cleaning lady and is a single mother of three. He quickly recognizes, however, that the film has more and more to do with his father. Why is he not allowed to see his children? With camera in hand, Samuel finds the courage to confront him.