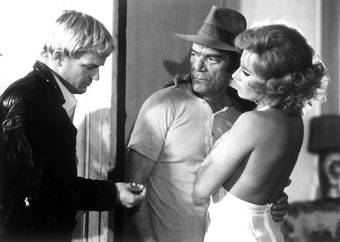 In a hotel somewhere by the sea a film crew is waiting for their director, the star, the money from the national film fund and the film material. It’s an atmosphere of hysteria and apathy, hopes, rows, envy, affairs. When the director Jeff finally arrives with his star, the choas immediately centers around him. Couples and groups form and dissolve. Sascha, the production manager, tries to organise the shooting with an iron first. Eddie, who in comparison seems like a fossil from ancient times, comes into contact with Hanna, the actress. Jeff explains the next scene’s production. The whole team, feeling more and more dependant on Jeff, rebels in pointless actions. Jeff is beaten up. Then, finally, the shooting can begin.