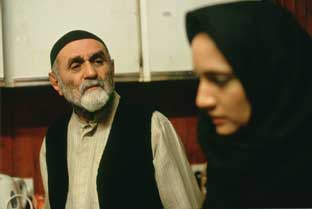 A Pakistani living in northern England, from adolescence Yasmin has rebelled against the culture of her native country. She is married, in name only, to Faysal, to please her father. The young woman tries hard to combine her western lifestyle with the constraints imposed by Muslim tradition. But this precarious balancing act collapses after September 11th. At work, Yasmin is shunned by her colleagues, and the unfortunate Faysal is suspected of belonging to a terrorist organization and arrested in Yasmin’s home. This triggers a turning point for Yasmin who, after undergoing a serious identity crisis, fights for her husband’s release. Slowly she reconnects with her roots.

What remains is a lonely father who’s lost both his children, the daughter to the modern world, the son to religion, and the bitter question whether not we Europeans and our habit to generalize drive Islamic people to extremism.