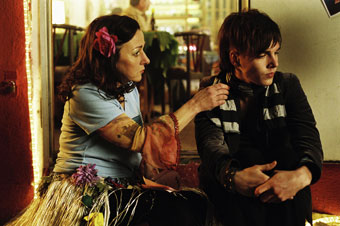 19-year-old Robert and his mother, Anna, live in Halle-Neustadt in the former GDR. The economic boom hasn’t arrived here yet and so Anna is constantly out and about hunting jobs for herself and her son. But Robert would rather be a musician or a revolutionary than lead an eventless life with a boring job in the pre-fab highrise estate.

At first glance it seems as if Jana, who is hiding with her elder brother Clemens in an abandoned kindergarten, was living the carefree life that Robert dreams of. The two siblings ran away from a bourgeois hell, but now Jana has to look after Clemens. To her, meeting Robert seems more like a threat. Only when she and her brother get into even greater trouble after a brawl with some youths do they allow Robert to help them. A tender romance evolves between Robert and Jana, but it’s increasingly burdened by the demands of Robert’s mother and Jana’s brother.

Hoping to leave “HaNeu” together, they try to free themselves from their dependent relatives. But it’s hard to let go – a catastrophe seems inevitable …

MARMORERA (THE SECRET OF …)BROKEN ENGLISH