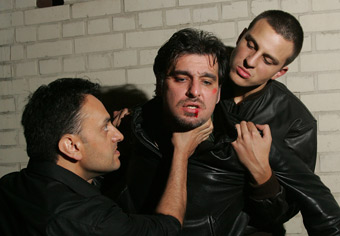 Tariq, an inconspicuous Iraqi student, gathers four men about him. They have no idea that he is planning a terrorist attack… This Iraqi turned fanatic by war propaganda finds it easy going with his fellow student Marc, a German with problems in his family who has converted to Islam. He is looking to his fellow believers for the support he so badly needs. Mesut, a Turkish cab driver, stumbles quite unsuspectingly into the assassins’ orbit. Financial help from his supposed friend draws him into a precarious situation, for Tariq demands an exceedingly high price to pay off his debts.

Sarajevo, a Bosnian, joins the terror group purely by accident. Traumatised by his war experiences, he has nothing left to lose. Levent, another Turk, makes contact through his fellow countryman with Tariq and his cohorts. He gives no reason to doubt his unconditional loyalty. His adroit behaviour allows him to conceal a fateful secret for a long time …