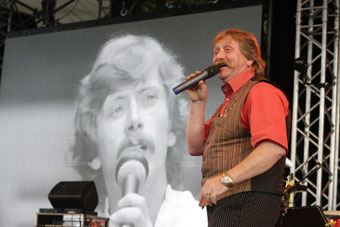 On a night in July in 1979, a dozen adventurous characters met at a fountain in Cologne. They were all hopeful for a singing career or at least just wanted to have some fun. Peter Goedel captured their musical ambitions with his camera, which became his film Talentprobe. Thirty years later, Manfred Behrens sought out those former “talents” and confronted them with their performance from 1979. Almost all of them still have some sort of musical connection, none of them could ever really forget this fateful July evening. Some still perform at informal musical evenings, others tried to make a living with it. One became the “Westerwald Elvis”, another the “Boy from the Hills”. They all went about their ways, dealing with compromise, illness and divorce. The film is about dreams and nightmares, strokes of fate come to the fore – normal life, in all of its facets.