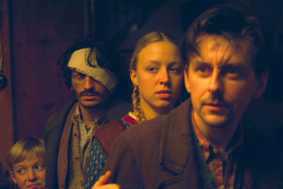 Austria in 1945. A village in Styria. A small group of partisans roams through the forests. The war’s more or less over. In a last-ditch effort, the ambitious fanatical Nazi, gamekeeper Fichtelhuber, tries to recruit the lame, the old, and the shirkers to hunt down the partisans. But nobody is really willing – from fear, from cowardice or stupidity, some even from foresight. After all, the allied troops will soon arrive and who knows what then? One of the partisans, Toni Lindmoser, who comes from the village, finds shelter with the priest.

Then the church bell is to be confiscated, but the village women step in. Mysteriously, the bell all of a sudden has vanished. The Nazis retreat, Hitler’s portraits disappear. The cards will be newly dealt. Liberation day.