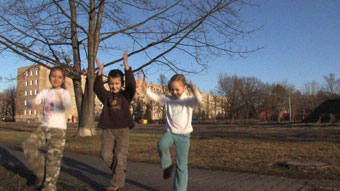 Hoyerswerda – a synonym for racism, a shrinking city and the end of a socialist dream. What is it like to live in a town that once carried prestige for being a model town? Galina from the Ukraine, Suleyman, Sinan, Suzan from Iraq and Juthamas from Thailand take us through Hoyerswerda with a camera, asking themselves: “Can I ever be happy here?”

For six months, the camera became a part of the daily lives of these kids. In the beginning it was all about getting to know the technical ins and outs of manoeuvring the camera. A crash course in filming. “How do you make a film?” “What do I want to tell people?” “How do I explain the experience of having a second ‘home country’?” All questions that Suleyman, Sinan, Suzan, Juthamas and Galina had to deal with.

In government housing, at the volleyball game, on the school grounds, at the shopping center or during prayer time – everywhere, integration is a question of communication. For six months, the producer and director accompanied these kids, setting up cinematic duties, observing the process and immersing themselves into the everyday realities in the lives of these immigrants.