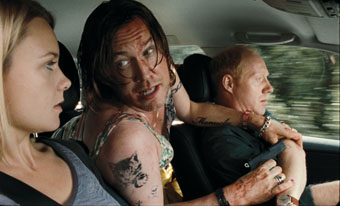 Robert has made an impressive career in politics, the parliamentary elections are soon approaching. But before the crucial phase of campaigning begins, he takes a romantic weekend trip with his wife Katharina to Tyrol.

Soon after leaving Vienna, Katharina notices that they are being followed. The car is hot on their trail and Robert cannot seem to lose him. At the next parking lot, Robert stops and confronts the “stalker” who turns out to be Wolfgang, a childhood friend. Wolfgang wants to chat, about the past, about the present. Katharina is interested, but Robert is not. He puts his foot down and tries to lose Wolfgang, but Wolfgang refuses to be shaken off and keeps on trying talking to his old friend.

Robert loses his usual nonchalant cool. But the things Katharina learns from Wolfgang reveal a dark spot in her husband’s past. Through the story of Wolfgang’s sister the two men have a fateful bond. Wolfgang insists Robert should confront the truth. In the meantime, Katharina suspects that there’s more to the story than just an unhappy teenage romance.

The trip becomes a tour de force and at the end of the day, anything seems possible …