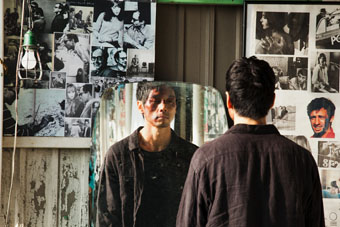 Struggling young filmmaker Shuji is dedicated to changing the state of cinema and demands a radical change in public cinematographic taste, back to the artistic quality of the classics. Frustrated, he finds solace in cherished role-models: Kurosawa, Ozu, Mizoguchi.

One day, two thugs come and take him away to an old boxing gym turned yakuza center. There he learns that his brother Shingo borrowed a lot of money to finance his filmmaking. Since Shingo couldn’t pay back the loans, he was killed. Now it is up to Shuji to settle the debts. For want of a better idea, he decides to sell his stomach muscles as a human punching bag.

The sick game quickly becomes a hit among the yakuza gang and Shuji withstands the beatings by thinking of his favorite films. Pretty Yoko, who organizes the punching sessions, supports him but at some point can no longer stand watching him suffer. She is replaced by the yakuza Hiroshi who successfully turns the whole event into big business.

As the payback deadline approaches, the yakuza boss comes up with other commitments. Shuji’s strength is weakening, but little does he know that his toughest battle is yet to come.