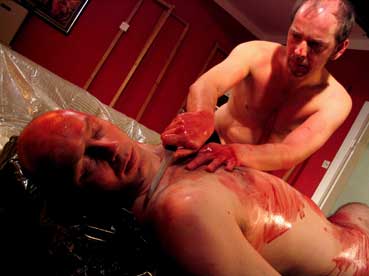 Achim lives by himself in a detached house in Berlin/ Spandau. He recently split up from his wife, Karin, who more or less cleared out the house. He’s a teacher but hasn’t been working for seven months due to depressions. In a chatroom he gets to know Peter. Their initial friendship as chess players soon develops into more.

Peter tries to turn Achim’s weaknesses into strengths, encourages him to express his emotions in sado-masochistic role plays. At times, Peter plays a Russian whore, then again a wayward pupil or a policeman. Achim is his own mother who is afraid of her wayward son. In the kitchen, they re-enact the cannibals of Rothenburg, and Peter threatens to slice off his own prick. Their relationship becomes more and more intense until one of them asks the other to kill and devour him.

The flesh in the deep freeze reminds of Peter. Achim can’t rid himself of Peter. He appears everywhere, in the cellar, in the bedroom, and encourages him to be proud of what he did.