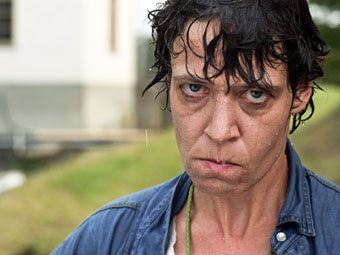 A village out in the sticks. Everybody knows everybody else, everybody knows everything about the others. The town is far away. The locals are more or less all by themselves. Trix Brunner, a single mother who moved to the village years ago, accuses a PE teacher of sexually molesting her daughter. The whole village is outraged – at the mother for making such a claim. After all, the accused is a former national champion.

In the 70s, the now elderly PE teacher Armin was a national champion in high diving. One of the few great moments in the village’s history. Armin’s trophies in the local bar’s display case are like a shrine to the villagers. Newcomers are tolerated as long as they are discrete and keep out of other people’s business. Otherwise, they are scorned, like feisty Trix Brunner. Punishment is isolation, and anyone who knows about life in small villages knows that this form of retribution is much worse than it is in the city.

But Trix Brunner hasn’t cut off all contacts to the city. Occasionally she gets together with Koniecka, a fast and furious reporter for a local newspaper. Trix Brunner and Koniecka have been friends since the times of the student revolts. Their friendship has cooled down over the years, but they both still hold their own.