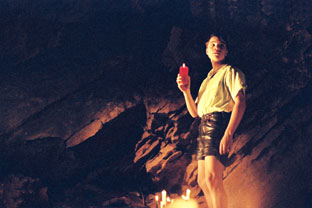 Between 1962 and 1966, Jürgen Barsch, a butcher’s apprentice in the industrial Ruhr area, sexually abused and killed four young boys. He was 15 when he committed the first crime, 19 when he was arrested. In a mental institution in Eickelborn the meanwhile 26-year-old, bearing the signs of illness, looks back on his life in the course of a (fictitious) therapy session filmed by video.

This monologue, based on published notes and letters, is punctuated with flashbacks illustrating his story – memories of his childhood in the 50’s and 60’s as well as the individual murders themselves -, interspersed with self-reflective passages from Bartsch’s diary entries. Supported by various montage techniques, the film approaches Bartsch’s personality without any commentary merely from his own perspective.