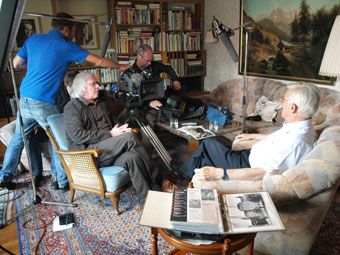 Two families – the fathers were raised in the “Napola”, the National Political Boarding Schools. Their children were to become the future elite and where therefore raised under the mercilessly strict conditions of everyday boarding school life. Their original will was to be broken in order to re-create the new elite. Remarkably, many did in fact rise to upper-class positions within society and became economic leaders.

But today, their children and their children’s children are forced to deal with this kind of upbringing. What happened to these fathers? What effects did this “education” have on their childhood and on future generations?

A filmic essay about psychological inheritance: about the continuous effects of this sinister time, for National Socialism, although it experienced its political downfall in the bombed-out cities of the Third Reich, is still alive and kicking in the psyche of the following generations.