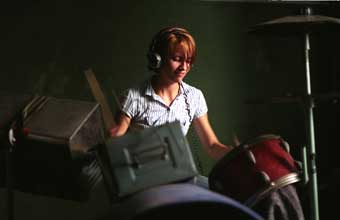 Lena is 17 years old, just about to do her GCSE’s, and is experiencing a phase of self-discovery. She knows exactly what she does not want, but cannot decide what she does want. She is living with her parents in Weimar. Her father lost his job as bridge engineer years ago. Her mother, also an engineer, continues to work in her profession, although in a less qualified position than before. Lena suffers from her father’s uncommunicativeness, his refusal to try to find work. And she feels how her mother suffers from this, as well. The oppressive silence at home is broken only when her father asks Lena if she finally knows what she wants to be.

No, Lena does not know! And she refuses to let herself be pressured. At a concert with her girlfriends she experiences the magic that can be transmitted through music. Now she knows she wants to make music. She wants to play drums. She and her girlfriends, Alex and Klara, have been trying their hand at playing as a small band for some time already. At first, none of them can play an instrument, not one of them knows which would be the right one for her, but they have fun playing together and that makes up for everything. Naively and passionately obsessed with the idea of becoming a drummer, Lena cheats her way into the music academy where she meets a tutor who recognises her talent and gives her lessons. But then she discovers that 12-year-old children can play better than she …