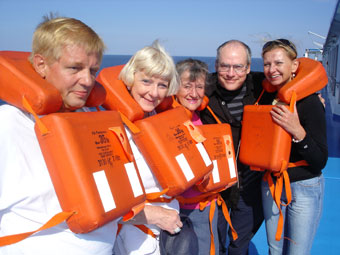 A trip on the river from Moscow to St Petersburg that mainly senior citizens from Germany take part in. For a whole fortnight they enjoy a tightly packed programme of churches, art, vodka, and Volga. They’re chased across ancient villages lined by souvenir stalls. On board, they learn Russian songs and folk dances and, under supervision, are allowed to do gymnastics.

What makes the film, though, are the protagonists: idealistic Renate who mourns the loss of Communist Russia, travel pooper Peter who only came along to please his girlfriend (“You see one tree and you’ve seen them all”), and passionate Ellen who unhappily falls for Peter. A helicopter is flown in to save a passenger who’s become seriously ill. But one thing makes cynical Peter ponder, too, and that is the wonderful sunsets, the incredibly beautiful nature, the peace and sheer expanse of the Russian countryside. And in the end, a little bit of the Russian soul remains with him, as well.