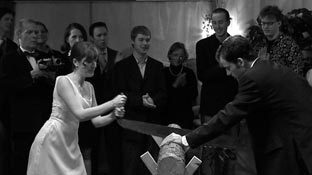 Even on the day you tie the nuptial knot you shouldn’t count your chickens before they’re hatched. At least that’s what two newly wedded find out at their wedding reception that gets out of kilter even before they’ve arrived. But communication problems with the caterer, the usual gibes among family members and the appearance of gate crashers are nothing compared to the drama that unfolds between bride and groom as the evening progresses.

And when the couple leaves early – though not to amuse themselves – and the family seems to be losing face, old and new conflicts arise among the guests who have no business being there. Or do they …?