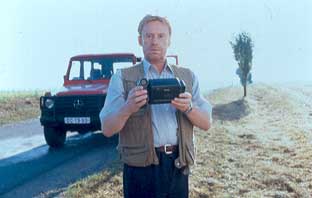 1993: The sleepy little town on the former German-German border where Jim and Elise live has hardly changed since reunification. The two are in love, but that isn’t enough to escape from village life. And so Jim dreams of leaving this dreariness with Elise for ever. But then he, by mishap, runs over a friend and becomes depressed. The relationship with Elise is strained. Jim moves in with Frank Morris, a mysterious American who’s rented a flat in town. He claims to be working on a film script and wanting to use Jim as a „model“ …