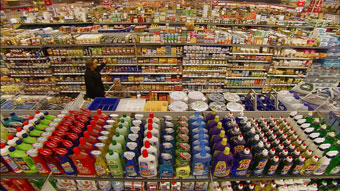 “The world used to be completely free of plastic. But then the Belgian chemist Leo H. Bakeland had his big moment. In the years from 1905 to 1907, he developed Bakelit, the first fully synthetic product make from petroleum. From that moment on, the acceleration of the creation of plastic has known no halt. After the Stone Age, the Bronze Age, the Iron Age, we now have the Age of Plastic. We are children of the plastic era.” That which we hear stands in sad contrast to that which we see: an idyllic mountain valley. Clouds, forests, blue skies – pure nature.

Super-8 recordings show the director as a child, a child who loved plastic. All the wonderful, brightly colored and nice-smelling toys he received from his grandfather, who in the 1960s just so happened to be the director of the German Interplastik factory.

But his childhood joy has turned into adult disillusionment. Forty years ago, Europe produced some five tons of plastic per year – proof enough for his grandfather that plastic indeed had a great future. John Taylor, president of Plastic-Europe, the umbrella organization for European plastics producers, can only smirk at this number. The powerful lobbyist agreed, as an exception, to an interview: “Right now, around 60 million tons of plastic are produced in Europe on an annual basis,” he says. “That is about one quarter of worldwide production. The amount of plastic that we have produced in the last 100 years would be enough to wrap up the entire globe, six times.” Far from a bright outlook.