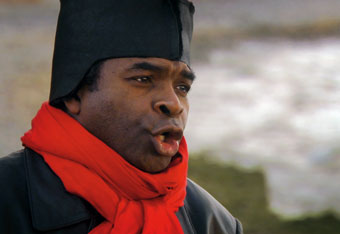 The African American singers of the New York Harlem Theatre have been touring with Gershwin’s PORGY & BESS, the world’s first black opera, for decades all over the world. They make three generations of African-American life experience, a cross-section of passionate people who are all united by one dream: to overcome the feelings of prejudice and exclusion that have shaped their lives for centuries.

“A white person will never understand what it means to be black,” says Alteouise Devaughn, one of the black protagonists. Right in the beginning of the film the scars of age-old wounds are evident. Already as children many feel the widespread prejudices and the lack of role models.

Life on tour is challenging and draining for the singers. Exhausting travel and constant moves from city to city made them give up a normal family life. But all these hardships are accepted in order to be an opera singer in the still predominantly white world of opera. The protagonists’ painful struggle to come to terms with their roots makes it clear that the past cannot be made to bear sole responsibility for their fate. They learn that to remove their shackles requires new ways of thinking and acting. They learn to rise above hoary clichés and step outside of the box to shape the future with their own hands.