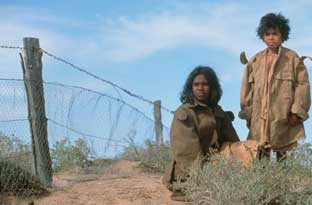 Molly, Gracie and Daisy were three Aboriginal girls living near the Gibson desert with their families in 1931. At that time the Chief Protector of Aborigines, Mr. Neville, had begun a policy of removing any half-caste child and taking them to ‚native settlements’ to be trained as domestic servants and farm labourers. As part of this programme Molly, Gracie and Dasy were forcibly taken from their mothers and transported south. After one day Molly decided that they would leave and walk back home, a journey of 2000 kilometers. The rabbit proof fence which ran throughout the country, north to south, would take them home.

It would be a journey which would take them three months, through some of the harshest country in the world. They would be pursued all the way by black trackers and policemen. Molly and Daisy are alive today aged 86 and 80.