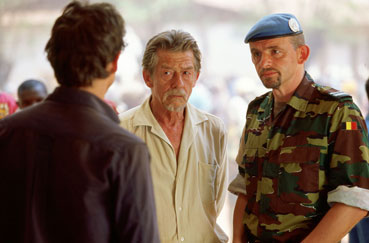 Father Christopher has worked as a priest in Africa for decades but is now finding it ever harder to hold fast to his faith when confronted with the region’s cycles of violence. Joe is a precocious young man who has come to Rwanda to work as a teacher at the Kigali secondary school run by Christopher.

A deep bond develops between the two men when they find themselves facing genocide’s unimaginable horrors and risking their own safety to try, desperately, to help. The school becomes one of few embattled havens for the area’s Tutsis and stranded Europeans. The refugees are joined at the site by a small Belgian monitoring force led by Capitaine Delon, whose good intentions are constrained by a painfully weak mandate from the United Nations. Loyalties change in terrible ways; terror and claustrophobia reign but motivate extraordinarily selfless acts of integrity and courage.