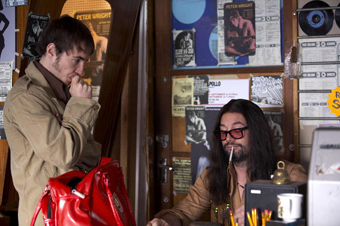 Stoke on Trent, 1974 – Amidst power cuts, strikes and boot-boy aggros on the football terraces, restless Joe McCain is bored with the flatline tedium of a life that’s going nowhere. He trudges through his Monday to Friday delivery van job, while pulling off some petty theft with his partner in crime and best friend Russ.

Enter trainee hair-dresser Jane. Blonde, brassy, and moving to the beat of a music that opens the door to a whole new world of sound, movement and all-night dancing at The Wigan Casino – the home of Northern Soul! Joe is immediately seduced by the music, the dancing, the drugs and Jane. He strikes up a friendship with Mandy, a cute and spunky artist who is eager to help Joe become the cool “soul boy” he wants to be. She helps him learn the all-important dance moves and a friendship quickly develops. Mandy falls for Joe, who is swept along on this tide of pulsating dance and lust, finally finding somewhere he belongs. As Joe falls deeper and deeper into the Northern Soul scene, his new paradise is threatened by Jane’s drug dealing boyfriend Alan. His friendship with Russ starts to crumble too. A love triangle develops with Jane and Mandy, and Joe has to decide who he really wants in his life.