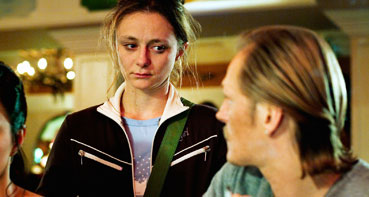 Kurt, a mid-30’s, is a compulsive gambler with neither luck nor discipline. His main occupation is scraping together all the cash he can, only to constantly be in debt. His gambling relapses have soured his relationship with his long-term girlfriend, Manu. One day Kurt „stumbles“ across the possibility of letting a die make a decision in a game. He is inspired by a lucky chance as well as by a TV programme on Mozart’s “Dice Composition”, a musical curiosity in which every possible variation ends up having the same harmony.

From now on Kurt‘s life, including the most mundane decisions, is determined by the irresistible pull of chance. With a roll of the die, he chooses one of six job offers and appears to be on his way back into society. But appearances are deceptive. Eventually, his house of cards collapses when he makes the encounter of his life which leads to the gamble of his life – and forces him to gamble with his life.

IM SCHWITZKASTENWHEN WILL I BE LOVED