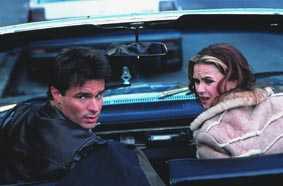 For the first time, Matt, a young, successful copywriter in advertising, and his girlfriend, Dawn, are spending the weekend in the Blackwoods where she wants to introduce Matt to her parents. They decide to spend the night in a motel before driving on to her parents‘. After a restless night, Matt is woken by whispering and noises. But Dawn has vanished without leaving a trace. Matt realizes that the intruders are after him …